“Do not miss this rich celebration of friendship—its power to heal, to fulfill, and to put life’s adventures into perspective. This book is as comforting as a cup of tea with your best friend.”


"Lisa Verge Higgins has delivered another masterpiece in fiction."

Enjoy this excerpt from Friendship Makes The Heart Grow Fonder! 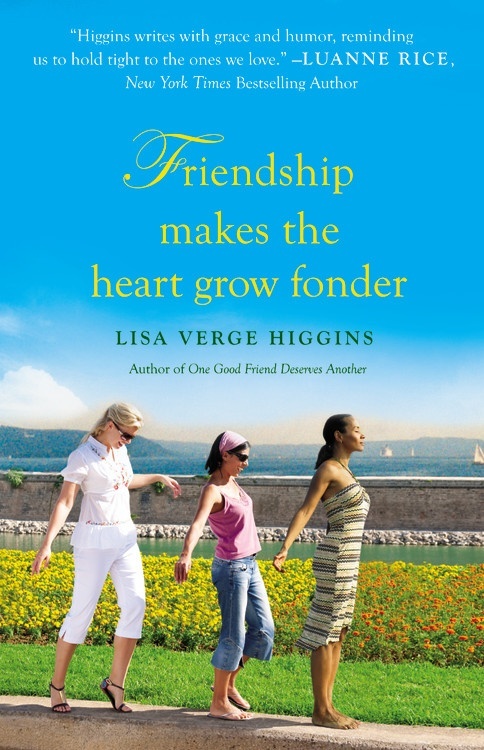 Sometimes getting lost is the only way to find what you're looking for.

Lenny left his wife Monique a healthy legacy and a bucket list—a list of adventures they’d hoped to experience before cancer took his life. For four years his widow ignored it, too busy raising their daughter to consider the painful task of resurrecting shattered dreams. But when Monique notices her earth-mother neighbor Judy acting crazy in her empty nest, and their best friend, Becky, traumatized by chilling news, Monique dusts off that wish list and contemplates it with new eyes. Lenny never meant for her to do this alone—and this crazy list of adventures just might save them all....

She sat on the edge of her bed. She knew she shouldn’t be here, alone in her house, engulfed by shadows. She should be outside enjoying the waning light of the evening with Judy and Becky and the whole neighborhood. Through the screen window, she smelled the mesquite-smoke scent of barbecue. She heard the rippling of her friends’ laughter as they gathered on the deck next door. It was the last Sunday of the summer. Everyone was home from the beach, the lake, and the mountains. Swarms of kids squealed as they jumped on the trampoline. In the driveway, an empty garbage can rumbled to the ground as if someone had stumbled against it.

Earlier Monique had made an appearance at the gathering, like she always did. She’d brought over a nice batch of doubles, her grandmother’s Caribbean-island version of spicy hummus sandwiches. It was a crowd favorite. She’d shown up because Lenny would have wanted her to. Lenny had always loved these casual get-togethers, sitting back with a beer and laughing with Judy’s husband, Bob, over some golf game. He’d tease Becky’s husband, Marco, for doting so much on his own young kids, even as Lenny leaned forward to allow those same giggling children to peel open the winged seeds of maple trees and stick them on his nose.

He did not disappoint.

She drew in a long, deep breath, smelling the faintest whiff of Brut. She let her eyes flutter closed. She detected a rustle in the room, like the sound of curtains blown by a tender breeze. She imagined she felt a pool of warmth, just behind and to the right of her, where the mattress canted a bit, sagging under an unseen weight. She heard Lenny’s rumbling baritone in her mind.

Taking that thing out again, huh? Second time this week.

She made a stuttering sound like a half laugh. Her heart began doing that strange pitter-patter thing, the one that reminded her of the swift skitter of a premature baby’s heart, the fierceness of it in the preemies she worked with in the neonatal intensive care unit. Her doctor had told her that palpitations sometimes happen when a woman approaches menopause. But she didn’t think it had anything to do with menopause. She was only forty-six years old, and everything else was working right on schedule. But she’d been feeling this sensation on and off since the day Lenny died.

I left you money to do that list years ago, Monie.

She smiled into the darkness. This list lived in the drawer of her bedside table, along with Lenny’s Mass card, his watch, and the case with the diaphragm she hadn’t touched since. “You left me with a thirteen-year-old daughter too, remember?”

Oh I remember she’s a handful.

“It just didn’t seem the right time, to flit off to Europe, me, a widowed working mom.”

Monie, when did you ever ‘flit’?

“Is it wrong to want to spend as much time with Kiera as I can? In less than a year, she’s leaving for college.”

Kiera will be all right. She’s like you, Monie. She’s strong in the middle.

A prickling started at the back of her eyes. The paper rattled in her hands. She didn’t feel strong, sitting here in the dark with her heart romping in her chest. She couldn’t help thinking about a biology lab she’d done while she was studying to become a nurse. She and her lab partner had put dissected heart cells into a petri dish and fed them an electric current to set them beating in dissonant rhythms. Within only moments, the cells began to adjust their throbbing to sync with the ones closest.

The heart closest to hers was dead.

She battled the urge to turn around and burrow into his burliness, to smell the scent of cut grass on his flannel. She’d succumbed to that urge once—the very first time she’d sat in this empty room, bent over, crying out for him. She’d sensed him then. She’d jerked up at the sensation. In her elation, she’d whirled around and found, instead of the man she’d buried, nothing but cold and silence and an empty bed. So she’d learned to hold her breath when she felt him, lest she scare away the ghost of his memory.

Her Trinidadian grandmother would have called him a jumbie—a lost spirit—and in her island patois she would have urged Monique to go to an Obeah woman to collect the herbs and the talismans needed to send the spirit of Lenny away.

She didn’t want Lenny to go away.

Monique read the odd things they’d written. Slogging through the catacombs of Paris. Rappelling down an alpine ledge. Hitting 100 mph on a German autobahn. She could barely remember what they were thinking when they dreamed up this list. The project had just been something to do to pass the time between chemo sessions or while the doctors were waiting for test results before they prescribed more pills. These trips were something to busy their minds with, something to joke about, so that Lenny wouldn’t completely lose hope, even while his burly body melted away in hospice.

Lenny never lost his sense of humor, not even in the end.

She ran her fingers across his spidery scrawl, noticed how shaky his handwriting became at the bottom of the list. “This was just a lark, Lenny. You don’t even like motorcycles.”

Maybe I just wanted to see you wearing leather.

She choked down a laugh. Her chest squeezed, muscling out all the oxygen. The truth was that the things on this list bore no resemblance to any part of the wonderful life she’d led with her husband. Their life was here, in their center-hall colonial on a street swarming with children. What vacations they’d taken had been modest—cabin-camping in western New Jersey, a week in a beach house in Wildwood, one splurge to Disneyworld—always tempered by the need to pay the mortgage and his medical school loans, and fatten up Kiera’s college fund.
She’d give up a thousand trips to Paris to have Lenny back, laughing as he hiked Kiera on his shoulders so their daughter could reach the red apples on high.

She clumsily folded the paper, running her fingers along the weakened seam. His disappointment was a chill as his presence faded from the room.

“I just can’t do this without you.”