"Fans of chick lit will enjoy this humorous and uplifting homage to good friendships and a variety of Americana." -- Booklist 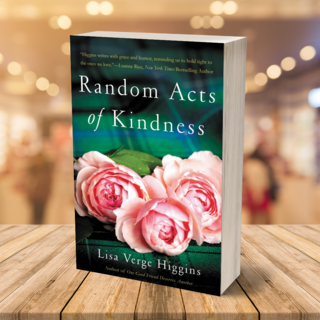 Three women commit to random acts of kindness which ripple out into the world...only to return and rock their lives in ways they never expected.

Throwing her past away was easier than Jenna expected.

She turned off Interstate 5 halfway through Oregon and took the exit to the Umpqua Highway. It had been over seven hours since she’d glanced in the rear view mirror and watched the skyline of Seattle recede. A rattling came from the back seat as her suitcase slid up against a plastic crate. That crate overflowed with the only things worth keeping. Black-and-white photos she’d pulled right off the walls, a Parisian coffee press that Nate had bought her in better times, and the tattered remains of Pinky Bear, a stuffed animal loved to baldness that she’d discovered swallowed in dust under her thirteen-year-old daughter’s bed.

She flexed her fingers over the steering wheel. A soft jangle of metal brought her attention to the passenger seat. Her Chihuahua mix lifted his head from his puppy bed, rattling his license tags as he pleaded with her with bulging brown eyes.

The GPS urged her on, guiding her through the twists and turns of the rural road. Her foot lay heavy on the gas. In her mind, she was fleeing an apocalypse. In her mind, the glowing trail of a meteor still streaked the sky behind her, ending in a mushroom cloud that billowed as it belched smoke from the crack it had made in the street in front of her home. Any sensible woman would run from that scenario. It didn’t matter that her particular meteor had been a sheaf of papers sliding across a kitchen table; the sound of the impact the click of a door closing.

Her sight went so blurry that she nearly missed the rusted sign that tilted off its pole. She jerked the steering wheel to make the turn onto Single Tree Lane. Her old Chevy Lumina kicked up a spray of rocks as the sedan swayed onto the road. Jenna drove under a canopy of pines until there was no more gravel to drive upon. She pulled the car to a stop in front of the lone house buried in ivy. The leaning mailbox sported a number. It matched the scribbled address she’d spent an hour digging out of her e-mail archives.

She sat with her hand frozen on the door handle, disturbed by the sudden loss of forward momentum. An impulse had propelled her here. But now, parked in front of Claire Petrenko’s house with its front yard tangled with grass and wildflowers, her impulsiveness ebbed. Normal people called ahead to say they were dropping by. Normal people sent e-mails or texts to reestablish a relationship with someone they hadn’t seen in a decade. Normal people didn’t just follow plans hatched in desperation while sobbing over the contacts list on their cell phone.

I must do this.

The small muscles at the nape of her neck tightened. She blinked at the house with its moss-streaked roof and sagging porch. A bike leaned against the corner of the porch, a metal basket hooked on the handlebars. Jenna could just imagine her old friend pedaling on the rural roads, skirts flying, bringing home organic groceries.

Then Jenna tumbled right back to her high school self, where she spent all her time clutching her binder against her chest, keeping her gaze on the laminated floor, recognizing people by their footwear, hoping and dreading in equal measure that someone would stop and engage her in the kind of superficial conversations that girls were expected to enjoy—Did you see that new boy in English class? Did you hear what happened at last Saturday’s hockey game?—the kind of small talk that would finally seal her place as part of a group if she didn’t freeze, stutter, or shrink back into her whorled shell like a startled whelk.

Lucky dug his paws into her thighs. She tucked him close. She made herself envision her daughter Zoe. Zoe, with her water-blue eyes and Nate’s dimples. Zoe, who was three thousand miles away sleeping in an Adirondack camp that banned all cell phones and any communication with parents that didn’t arrive through the U.S. Postal Service. Zoe, who was too far away to scream at her mother that she hated her and thus didn’t care about what had just happened.

Jenna shoved the door open and stumbled out of the car. She lurched on her bad leg as she tightened her grip on Lucky. If she moved fast enough, she could outrun the fear. So she crossed toward the porch, ignoring the goat tethered in the yard and the flash of sunlight off wind chimes swaying from the porch eaves. The second stair bowed under her weight. A big black bird on a perch by the door rustled his wings. The creature cocked its head, skewering her with one shiny black eye.

Lucky whimpered. She dropped him to the floorboards just as he loosed a stream of urine.

Yes, throwing her old life away was easier than she expected.

Starting a new one was not.